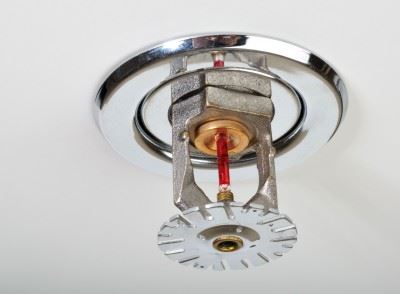 Home ﬁre sprinklers protect lives by keeping fires small. In many situations a family who has survived a ﬁre will also have their “home” to live in and enough of the items and space in their home to continue living their lives as they did before.

Fact: Smoke alarms alert occupants to the presence of danger, but do nothing to extinguish the fire. In a fire, sprinklers can control and may even extinguish a fire in less time than it would take the fire department to arrive.

Fact: Leaks are rare, and are no more likely than leaks from a home’s plumbing system. A sprinkler is calibrated to activate when it senses a significant heat change. Sprinklers don’t operate in response to smoke, cooking vapors, steam, or the sound of a smoke alarm.

Myth: When a fire occurs, every sprinkler will activate and everything in the house will be ruined.

Fact: In the event of a fire, typically only the sprinkler closest to the fire will activate, spraying water directly on the fire, leaving the rest of the house dry and secure. In roughly nine of every ten home fires with operating sprinklers, just one sprinkler operates.

Myth: The water damage caused by sprinklers will be more extensive than fire damage.

Fact: In a fire, sprinklers quickly control heat and smoke. Any water damage from the sprinkler will typically be much less severe than the damage caused by water from firefighting hose lines. Sprinklers use approximately 90% less water on a fire than a fire department hose line would.